Of course, new music can often be fairly pretentious regardless of the genre.

That’s why reviewers and musicians eye each other warily.

A reviewer is, for the most part, a frustrated musician.

We want to be the ones in the studio, on the gig, or sitting at a keyboard or with a guitar in that 3 a.m. writing fog with only another verse to go and, perhaps, a novel way to add a twist to the bridge, and a slam-bang coda to finish off the NEXT BIG HIT!

Except, we usually are sitting at our own keyboard hammering out words in our own peculiar rhythm in hopes of translating what we are hearing into something useful for music fans.

Baby, it don’t come easy on either end of that seesaw.

Especially when it comes to the blues.

Rock ‘n’ roll can be all over the place.

For all its contrivances, rap almost never has anything fresh to offer.

The stuff that passes for country today is about as appealing as a dirty sock that has laid under the bed collecting dust bunnies for seven months.

And, most of that other new music?

To be honest, I am so sick of the minor-chord gnashing of teeth and whining nasal wimp-pop-rock gray water I would like to take a 10-pound sledge and tune up their mixing boards.

It’s why I only really trust some of the classic rockers and, of course, this thing we call the blues. They are the only reliable, dependable friends I have in music these days and if you want to make fun because I lean to geezer rock and 12-bar, after-midnight excursions into the soul that’s your problem, not mine.

I’ll offer no apologies for preferring “Sticky Fingers,” “Darkness On The Edge of Town,” “Wildflowers,” or just about anything by Willie Nelson over time lost wrestling with the alt-indie crowd or bands that don’t feature even one guitar.

And, if you are going to wrap yourself up in a blues package, you’d better be able to deliver because the blues is, in musical language, the truth, something players hiding behind the badge of blues like clinicians Clapton and Bonamassa never quite get.

Then, there are some who are so bent on pushing the envelope that they sound like a cockroach garage band on bad acid. (We saved you the pain of one of those bands by listening and handing a huge thumbs-down to something called “Solo Elektro” by a guy named Gwyn Ashton. I don’t quite know what this Aussie guitarist is trying to say and I honestly don’t think he does, either. Recommendation? Take a pass. Run as far away from it as fast as you can.)

Of course, because the blues is such a distinct genre unto itself, there is always the chance that new material can blow chunks because it is too derivative.

Jon English has one of those pure, clear voices. He’s not going to send you back to the archives to find gruff, old-time blues pipes to compare with his. It’s kind of like when Jim Morrison came on the scene with his classic voice that didn’t sound like any of his contemporaries.

English is that way. The voice rings clear, the timbre unique and pleasant, the range nice and full.

Bruce Krupnik is one of those savvy guitar players who knows how to use his skills to serve the song rather than wasting energy on dive bombs and pyrotechnics. Tony Jack Grigsby plays a full, lathered-up bass that carries the riff-heavy tunes forward atop dead-solid perfect drumming by Stan Whiting. 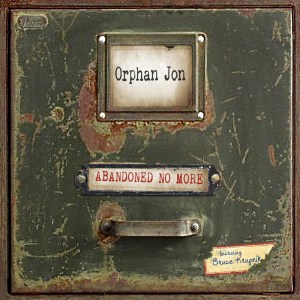 One of the things I like about the blues is that it really is a sort of breeding ground where various influences can mingle. It’s a dirty gene pool and you never know exactly what is going to crawl out.

These guys have found a way to bring together some of the best of the swampy, gooey, sticky blues with that sewer-pipe slap back, spongy bottom, and rifle-shot beat.

Listening to Orphan Jon I buzz through some early Stones-ZZ Top influences, particularly in the first cut on the album, “Backbone,” to some full-on Robin Trower touches (“Dance For Me Girl,” a rather mournful, soulful dirge that is very Trower heavy.)

But, the blues is also about creating a mood and we get plenty of that.

“Blood Moon” takes us on a canoe ride through the back bayou.

“Vicious Circle” is more of a traditional Chicago blues number with an overdriven guitar buzzing out 12-bar sweetness that proves there is some validity to the notion that there’s no money past the fifth fret. This one, by the way, also carries an evocative vocal.

Like to boogie? Then go straight to “Drive Me Crazy,” with its roots deep in some Stones’ “Hip Shake, Baby,” or “Love Light,” where Krupnik proves he’s every bit the riffmaster with his prowling the back alley intro.

Jon’s best vocal surfaces in “Leave My Blues Alone,” which brings down the pace and is the most expressive, passionate piece on the album. Some finely tuned dynamics come into play here in one of those late-night, hard whiskey served straight up songs. It’s boozy, ballsy, burning.

The band also likes to push that envelope and does so quite nicely in “Only She Will Do,” a jazzy little piece that picks up some surprising Wes Montgomery-like time changes. Just about the time you settle into a groove, you get fed another one, shifting tempo and ‘tude.

Jon’s voice rides evocatively over some tasty slide work in “Cold Man Blues,” a dark and brooding song of clear and startling despair.

“Sowin’ Seeds” explodes angrily with a chugging drum lick and that heavy bass.

But, my favorite piece on the album is one that separates itself from the 11 others, even to the extent of turning up as the very last track.

“Memories of Me and You” is an acoustic piece tracked live.

It’s one of those songs that hit you in that quiet space late into the night after an exhausting gig when all the senses remain in full tingle but the energy is sapped.

I envisioned it being recorded in a darkened, empty club about 3 a.m. while the bartender stacked shot glasses. It’s a treasure, a gem of a song with deep personal meaning for Jon, who said it was inspired by his wife, Stella.

“A few years ago when Bruce and I first began writing together, I told her that I needed to write her a love song,” Jon told me. She said, “Babe, I’m living my love song,” and bam, it came to me. It’s the track that Bruce and I are most proud of. The track was recorded as a raw single track, nothing separate on the micing, with just one take, as I had wanted. We didn’t even practice it…we just sat down and recorded it as you hear it.”

The song is brimming with passion and Jon’s vocal drips with an emotion that overwhelms. This is the blues, the personal, one-on-one thing that connects us at the heartstrings.

The song is intimate, vulnerable and hints at the grit factor in Jon’s vocals, something I hope they develop further next time around. Still, the strength of this song pushes it to an 8 ½ on a scale of 10.

2022 is looking very promising for Orphan Jon and his band The Abandoned. Starting with OJATA being invited to perform at the Galaxie Agency/Topeka Blues Society Showcase at BB King's in Memphis, Tenn. during 2022 IBC Week. Details can be found by clicking on the "SHOW" tab located at the top of this page.

We're excited to announce Orphan Jon's partnership with The Galaxie Agency. This great step is being taken to further the reach of OJATA's music, and to open up more possibilities to share with the world our passion in live entertainment both nationally and internationally. Thank you Gina Hughes and The Galaxie Agency for this invaluable opportunity. https://www.facebook.com/137719056281970/posts/4766880060032490/

We're very excited to announce that OJATA will be going into the studio in late January 2021 to record Orphan Jon's second studio album. And we're even more honored and thrilled to announce that Alastair Greene of Whiskey Bayou Records will be the Producer. Alastair has teamed up with Jon English to co-write most of the songs on this project, as well as being the guitarist on the recording. So, there will be a few surprises for OJATA fans to enjoy! We are looking forward to sharing this album with you as soon as possible. Look for a 2022 release. But in the meantime you can purchase our newest release on Rip Cat Records "Reckless Abandon" LIVE! directly from us on Venmo @OrphanJon. Just $20 free postage included.

GET YOUR SIGNED COPY TODAY!

So keep coming back! Keep spreading the word! And keep living life to the fullest with OJATA along for the ride!

Drive Me Crazyby Orphan Jon & The Abandoned
"Drive Me Crazy" sample from our debut album "Abandoned No More" on Rip Cat Records.